Will Mckean does Vegas 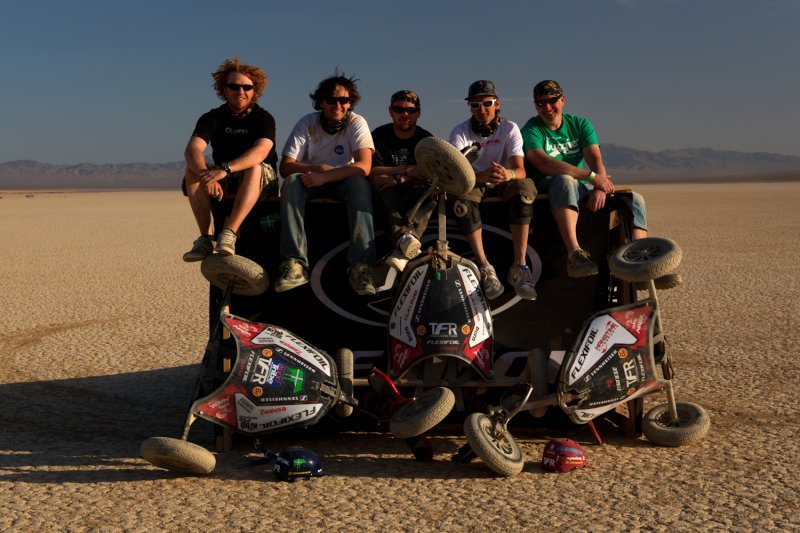 Its been a long time in waiting but our Freestyle Kite Buggy rider Will Mckean has finally pulled his finger out and told us what he has been up to in Las vegas of all places!

Will headed out to the largest land based kite event in the United states at the end of march for two weeks of fun filled action on the dry lake beds just outside of Las Vegas, Nevada. After flying in a few days early and meeting up with some good friends, it didnt take the boy long to get the NDA Cow in prime location on Las Vegas strip!

Now, believe it or not, Will actually goes out here to show the yanks how its done. (along with some other UK lads) cos believe it or not, the Brits are untouchable when it comes to this sport! The event is held on a massive dry lake bed called Ivanpah, situated 20mins outside of Vegas. Now for you lot who think flying kites sounds a little soft and a bit feminine, let us tell you a few facts and figures. On this super hard, grippy surface, Will can reach speeds over over 60mph! And not only can he reach those speeds, in the right conditions, 0-55mph takes just over 5 seconds!

The surface is so abrasive, that a supply of 160 tyres for the three lads is a must and if they try hard enough can go through a set of rear tyres in under 4 miles! Thats one seriously nasty surface! But will is a Freestyle buggier, so staying on the ground is not one of his strong points. With the right winds and a big enough kite, will can jump off the flat to a height of 15-20ft! Thats high. Like… REALLY high!

For the light winds, they built a ramp…… A 5.5ft high, 8ft wide wedge of take-off perfection. Even in the light winds the photos were taken in, the results were pretty impressive. Spot the cow on his helmet, buggy and ramp?!

With some serious riding under his belt this year along with some obviously memorable moments in Vegas. We even got hold of this picture of will showing us his sleeping skills in a wheelchair…… 4hrs passed out like this was it Will?!

Will is off to a massive event called Beach Break Live (www.beachbreaklive.com) Lets see where the Cow ends up this time!